And the righteous NEVER sleep. 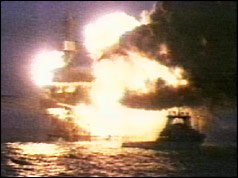 1988 and the Piper Alpha oil rig goes up in a ball of flames killing 167 oil rig workers.

The fire is believed to have started after explosions at about 2230 BST (2130 GMT) on the Piper Alpha drilling platform, 120 miles (193km) off the north-east coast of Scotland

We should all know by now that working offshore on an oil rig is dangerous and stressful work. Oil rig workers are like soldiers that are sent to a war zone for months at a time, cut off from their family and friends, under stressful conditions and working long, long shifts, never knowing what fate may throw their way. It's the kinda work that me and you would not, or could not do, we don't have the balls that rig workers have but we are happy to reap the benefits that comes from their long, hard labour as we stuff our over taxed petrol into our cars, we care not one jot how it got into that petrol pump we have in our hands!

Oil rig workers are paid handsomly for their long, dangerous toil, and rightly so. They are given, by their employers good subsidised food in onboard restaurants that are equivalent to any 5* eatery you may find in your high street. Who would deny these workers a little comfort in their working schedule eh? Not me, nor, I suspect, you.

Step up to the plate NHS Grampian who are not interested in their [oil rig workers] health and wellfare while they stressfully go about their working lives, but the fact that they get cheap cigarettes irks them so much that they are calling for a change in the law to deprive them of cheap smokes.

NHS Grampian today called for an end to cheap cigarettes for oil workers.
Health bosses want workers on rigs and vessels offshore to be prevented from buying cut-price tobacco.
And they urged the Scottish Government to extend new restrictions on tobacco sales to cover offshore.

Where the hell do these health fascists get off?
You may be thinking that the Piper Alpha tragedy may never happen again due to newer health and safety regs...think again!

How will it be 'policed'?

I have no idea anon 14:20, I never knew that rig workers got subsidised ciggys, the NHS website is pretty scant with info so have no way of finding out who supplies these cheap ciggys...is it their employers? Is it the government? Who knows, all I can see is that NHS Grampian are trying to make a name for themselves in the lucrative anti tobacco market.

I think the time has come for the Public to be protected against NHS Grampian, how much more Foolish can they get ?

Don't be fooled into thinking this is NHS Grampian working alone.

This is part of a strategy involving the Scottish Government,ASH(Scotland)and their Anti-Tobacco Alliances,Community Health Partnerships( infiltrated by the Anti-Smoking Zealots),Scottish Councils,Trading Standards Organisations,CIEH and not to mention the vested interests of those who sell Varenicline(Champix)
with it's deadly side effects.

The Anti-Smoking Zealots dream is collapsing around them,that is why they are resorting to assaulting smokers in the street(the CIGGY BUSTERS video on Youtube).

INTOLERANCE IS THE MOST PREVENTABLE CAUSE OF INEQUALITIES.

Sad bunch of bastards at NHS Grampian
its clearly right they don't appear to care about the stressful lives of the rig workers, so long as they cannot buy cheap cigarettes.
What a bunch of dictators !

One would think that they'd actually have some priorities....like safety. NOT.

This is in no way about health. Its simply spitful

I have a hard time figuring out how they think us land lubbers smoking is any of their business but oil rig workers? I bet theyve never even met one.

Is it right that the rig workers fags are subsidised or do they not pay tax on them because they are offshore? Does duty free apply?

I wonder how long it'll be before they suggest banning smoking on the rigs. Good piece TBY especially with reference to the demanding nature of the oil rig work, which many of us don't have to think about on a daily basis.

We know that NHS Grampian cares little for safety ... otherwise why would it consider making NHS smoking nursing/medical staff go cold turkey for up to 12 hours a day when they are treating patients.

Thanks Belinda for your kind comments. We've been here again, and again and again. They intimate that they are only thinking of workers health in most cases but the NHS Grampian don't even try to qualify their words with hard, cold facts. They think they only have to mention the word 'smoking' to get money that they think they richly deserve.

They are charlatans posing as benefactors of the unwashed.

They are evil, manipulative bastards that want their own way and do or say anything to get it.

I used to have a healthy regard for the NHS...but not now, they are being driven by sheer greed and a slice of the anti smoking cake.

As a microbiologist who stays clear of the woods and who has personal experience of NHS Grampian's utter indifference to the deadly diseases rampant in their hospitals, this is no surprise.

The rigs don't get subsidised smokes, they are out of duty range so get duty free smokes.

That means less money for the NHS and money is the only thing that matters to them. Fuck the sick, they are a drain on the NHS.

Better carpets in the admin block and a Lexus for the tofu diversity non-smoking teetotal slimness outreach coordinator is all that matters to them.

It has reached the point where if the entire NHS collapsed, we would overall be healthier. The NHS are a drain on us.

Seriously. I've seen what's happening in NHS hospitals. Stay the hell out of there.

They are not about health and have not been for some time. The government are keen to keep them for a reason, even though the current system is useless.

They are testing things.

The latest antibiotic resistant ones blamed on Pakistan didn't come from there. They are just blamed on the latest bugbear.

One day I'll post it all but it will be the day before I vanish for good.

In the meantime, stay the hell out of the NHS even if the private charges bankrupt you.