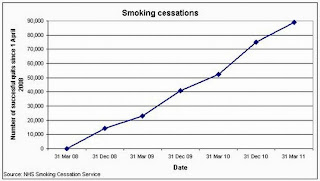 Source
I had a double take on seeing these figures – under the impression that quit rates were negligible, especially after noting that smoking rates in Scotland have risen in the last few years.

These figures are based on a three-year period spanning March 2008 to March 2011. The report reads that nearly 90,000 gave up in these three years. The figures are presented with a cumulative total, which gives the impression of a lovely steep incline – because the point of it was to show successful quits since 1 April 2008. Of course it wasn't the case that nobody gave up in March 2008, or that 90,000 people gave up in March 2011. If the graph showed individual totals for each three-month period, the steady incline suggests that the line would appear flat at around 30,000 per year or 7,500 a quarter.

The really important matter here is not brought to the fore: figures are for four weeks, and the rate at twelve months is given as 8 per cent. Fewer than 10 per cent of attempts at quitting are recorded as successful at one year.

Value for money? I find it hard to believe that finding a publicly subsidised market for smoking cessation treatments isn't a significant aim in this stupendous effort to stop people from smoking.
Posted by Belinda at 23:12

Thank you for providing this info on Scotland's quit-smoking stats. There are several items of interest here but the most useful one is the 8% success rate at 1 year, this has never been given for England for example.

The UK's stop smoking services are nothing more than a taxpayer-funded support system for the pharma industry, at a cost of around £180 - £200m a year.

An expensive, useless, corrupt system owned by an industry and utilised for their own purposes. See more details at:
http://www.eccauk.org/index.php/nhs-quit-smoking-fail.html

Who has the capability to show the direct correlation between the increased investment in Smoking Cessation and the lack of decrease in smoking rates?