Bill Gibson of TICAP (The International Coalition Against Prohibition) attended last month's meeting at Westminster supporting an amendment to the smoking ban. His response is published below (Annandale Herald, 7 July): 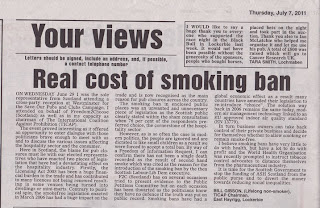 There is indeed a European-approved air quality standard (EN 13779) as stated in this letter. This standard acknowledges that smoking is an important factor in air quality but simply handles smoky air differently from air in a non-smoking environment.
It doesn't state that it's impossible to remove smoke from the air, in spite of what the EU published two years after this standard appeared. 'There is no safe level of exposure to tobacco smoke, and notions such as a threshold value for toxicity from second-hand smoke should be rejected, as they are contradicted by scientific evidence.' Eh? The air quality standard (EN 13779) doesn't even argue that smoke isn't toxic – in fact it  specifies tobacco smoke as an air quality issue that must be resolved in order to achieve good indoor air. The idea that tobacco smoke is the only pollutant that cannot be dealt with effectively by technology is laughable.
Air Manager is an officially approved air cleaning system. Question 7 of its Frequently Asked Questions reads 'Does Air Manager remove harmful chemicals?' The answer: 'Yes. AirManager is scientifically proven to remove chemicals, VOCs (volatile organic compounds), tobacco smoke etc in excess of 99.999% in a single pass.' I can only repeat, Air Manager is an officially approved system (UK Accreditation Service). Why do they go to the trouble of approving this technology, only to then allow another government department to convince the public that it doesn't really work?
Bill Gibson does right to draw attention to EN 13779 (air quality standard) document and show its relevance in the smoking ban impasse.
Update 9 August: The EC has carelessly lost track of the link to the key document, EN 13779. Courtesy of Freedom2Choose we now have an alternative link to the original document.
Posted by Belinda at 00:16

This confirms to me that one branch of a successful strategy to overturn the ban would be to persuade this companny to loan one of the machines (I, for one, would be prepared to contribute financially), to be installed in a tobacco smoke extraction research establishment (which is legal). Volunteers would, for a small donation to cover the cost of coffee and newspapers, be allowed in and their smoking monitored. A real time display would be posted on a website showing the number of people smoking and various measurements of air quality. This company might view this exercise as an excellent advertisement for its product.

Smoking ban legislation is unlawful in the first place and is in need of a Judicial Review, because it is in direct contravention with the Human Rights Act 1998 for treating smokers as second class citizens, and refusing the rights of choice for business owners.

I don't know if you are aware of this but here's an interesting document - Select Committee on Health, Minutes of Evidence in 2005 including evidence about ETS and also the claimed ineffectiveness of ventilation!

Response to ventilation evidence - "Dr Taylor: That is very, very powerful." (and no doubt substantially influenced the eventual outcome)

Some of this is easily rebutted and is worth noting for future reference.

Very interesting kin free. They all agree that the purpose of a ban is not just to protect paople from passive smoking. I'll send the statements about ventilation to the company in Belinda's post. See what they have to say.
Hackshaw is the author of yeaterday's birth defect paper.

Kin_Free It seems that the questions to the witnesses weren’t as strong as they could have been. The committee members had already made up their minds.

We have many studies that prove the point regarding the effectiveness of ventilation systems that have been sourced from independent research organisations and in the fullness of time will be presented as scientific evidence.

Bill - where can this info be seen about the passive smoking evidence?

Do you have a link?

A Press Release to follow ... but here is a snippit "Following a search of our paper and electronic records, I have established that the information you require is not held by the Scottish Government."

There appears to be a connection issue with the main link. We're working on finding another link to it.