Denormalisation of drinkers and the alcohol trade? 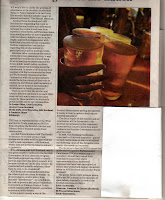 The battle continues: Under the heading 'Trade ban for the alcohol summit is for the good of the nation', Sheila Duffy (ASH Scotland) and Evelyn Gillan (Alcohol Focus Scotland) respond to criticisms that the Wine & Spirit Trade Association had been excluded from taking part in the Alcohol and Tobacco Health Policy Summit.

Published on the same page, from Eddie Douthwaite (Freedom to Choose (Scotland)), comes a letter challenging the Scottish Government that will take office following May's General Election. Will such a government willingly accept the conclusions from a summit that has excluded people with an informed input? What of delegates attending the summit? will they voice any disapproval that the trade has been sidelined? (or will they be so relieved to be 'in the club' that they will agree that it's in the nation's best interests to leave the industry out of the reckoning?)

Will parties generally adopt the idea that only public health personnel should contribute to public health policy? We have already learned from Richard Simpson MSP that Labour (if elected) will engage with the alcohol industry in accordance with WHO guidance. But Duffy and Gillan tell us that according to the World Health Organisation:  “interaction with the alcohol industry should be in the context of their role as producers, distributors and marketers of alcohol, not in terms of alcohol policy development or health promotion”. So perhaps Labour will gladly swallow the results of this summit.

Whatever Richard Simpson's views on alcohol, David Nutt outdoes him by miles. On the other hand Vivienne Nathanson of the BMA wants to denormalise alcohol by ensuring that it is not displayed next to food. But in this respect Scotland has the edge, as it already restricts the displays of alcohol in shops to a single aisle. (Says Gavin Partington of the WSTA: "Far from demonising alcohol, surely we should encourage people to drink with food," but no one listens because he is employed by the demon drink trade association.)

Five years after the smoking ban was introduced, life doesn't look much brighter for the licensed trade in Scotland. In October, they face the removal of tobacco vending machines and (what concerns them more) the introduction of a mandatory Challenge 25 policy, meaning that staff will feel their jobs are on the line if they don't ID anyone who doesn't 'look 25'. What does a 25-year-old look like? Someone of 24 can be approaching junior management levels and over in some jobs. They might have children at home up to four or five years old, and they might have completed a few tours of duty in the army. In terms of physical maturity they have as much in common with a 17-year-old as someone of six years old has with someone of 3. Whatever the purpose of Challenge 25 (especially as a condition of licensing), it is unlikely to present an obstacle to 14- to 17-year-olds who want to drink. The only thing it is likely to achieve is the alienation of customers. Challenge 21 should provide enough margin of error in most venues. Parliamentary deliberations in November 2010 did not question whether this policy would stop underage sales, but seemed to take it for granted that any deleterious effect on the licensed trade was no bad thing in the long run. The Scottish Licensed Trade Association Chief Executive rightly condemns this useless form of identification:


Waterson branded Challenge 25 a "joke" for pubs. "There's absolutely no reason for pubs to be running Challenge 25," he said.

I can't see a reason either.

There are too many factions here, however: the licensed trade can be picked apart by governments and by lobby groups (ASH Scotland and Alcohol Focus Scotland) with restrictive agendas and money to burn on divide and rule tactics. Everyone in the community should demand full participation in any publicly funded policy summit, because in the end we all contribute to the cost of these events, and the people that run them are our servants and not our masters or managers.
Posted by Belinda at 02:12

Challenge 25? I must apologise for exhibiting my ignorance, I have not lived in the UK for some years, but surely it is legal for an 18 year old to purchase alcohol and to be served in a pub or bar. When did the age of legal majority change? If there is nothing illegal in an 18-25 year old buying and consuming alcohol then I presume their, quite legitimate, response to anyone who questions them about their age will be "f**k off and mind your own business". It may even be more hostile than that. One has to wonder if this is the kind of reaction the people behind these insanities are after. If someone gets annoyed with them they can then claim they are seeing the "horrendous effects of underage binge drinking".