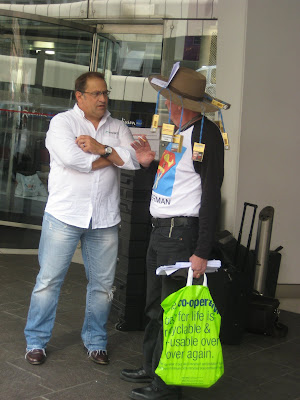 The date is uncertain but e-cigs look like going the same way as smoking in bars. This time over to Frank Davis.
The approach of the whole process seems to have a staggered approach. First they banned smoking in pubs. Then they tried to reason that having 'protected' the adults from secondary smoke, it would be criminal not to protect the children, and increasing calls were made for bans in motor cars and the promotion of (for now voluntary) no-smoking homes. If they had considered the children first they might have preferred to mandate the use of extraction systems, and allowed pubs to keep smoking rooms.
Next: we banned e-cigs, yet we still allow people to use tobacco!
Photo: F2C Scotland Chairman Eddie Douthwaite interrogates (soon to be unemployed?) e-cig company representative at recent smoking cessation conference in Glasgow.
Posted by Belinda at 20:28

This whole Tobacco Control thing is bordering on the rediculous!

If ever proof were needed that you cannot legislate for stupidity then the legislators are that proof!

They're all eejits, that's for sure.

That rep Eddie was talking to was from Intellipig. They reckon they're going to get a medical license for their product. It's one of the nasty brands that puts a lot of people off so I don't suppose that will be an earth shattering development IF they do get approval. They've been happily rubbing their hands together at the thought of having the competition wiped out for them and spend a lot of time sucking up to the regulators. Sneakily I hope they spend lots of money on trials and licensing and then get told their product doesn't work and can't be licensed.

seems to have been a misunderstanding, will clarify as soon as possible.