Yet another attack on ASH Scotland has appeared, this time in The Scotsman: 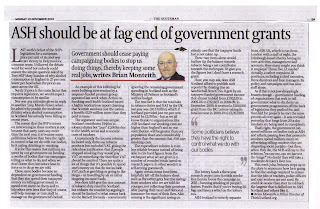 (click to enlarge)
(A substantial chunk of this appears here.) Brian Monteith is not the first to find fault with ASH Scotland's calculations of smoking costs. More can be found here, here and on this blog.

In the meantime Simon Clark also has a cautionary note for those who think that ASH (or ASH Scotland) can be challenged on the basis of being 'fake charities', and links to this document by Blad Tolstoy, a veteran campaigner on smoking/prohibition issues. The document concerns the English ASH organisation and English charity law, but the point remains that charity law is not the best line of attack on ASH Scotland. The atrocious quality of their publications and their support of nonsense (like the 17 per cent reduction on heart attacks that supposedly resulted from the smoking ban in Scotland) are good lines of attack, but (says Simon):


Last week I was quoted in a retail trade magazine. 'Tobacco control groups are no longer interested in educating people about the health risks of smoking,' I said. 'Their strategy is to denormalise and stigmatise adults who consume a legal product.'

Today the tobacco control lobby is more interested in coercing people to quit smoking, with groups such as ASH using every "confidence trick" in the book to achieve their goal of a 'smokefree' (sic) world.

Illiberal smoking bans, display bans, claims that smokers are harming (and even killing) those around them - this has nothing to do with health and everything to do with denormalising not only a legal product but the consumers of that product.

Thanks to charities like ASH, many people's social lives have been ruined, businesses have closed and jobs have been lost. I fail to see what's "charitable" about that and for that reason alone I am happy to call ASH a fake charity.

I think that will do for me too.

EDIT: a reply has been printed in The Scotsman letters page today. Please add yours!
Posted by Belinda at 14:01

An excellent article by Brian Monteith.

When will the current MSPs see the light and realise that the smoking ban was introduced as a result of cherrypicked studies, manipulation of data, and in the case of ASH Scotland downright lies.

I concur with Eddie about this article on this blog. How are these thugs at ASH, in any country, getting away with such lies and deceptions? Their twisting of the facts are alarming and should ring bells even in anti smokers minds.

..and I concur with Eddie and John as well:-)